How to Read Beauvoir

Sometimes the slimmest books are the ones that take the most time to read, demand the most focus, insist on a cup of coffee rather than a glass of wine.

Stella Sandford’s How to Read Beauvoir struck that alarm bell for me.

All the more loudly as I have not. Read Beauvoir, that is.

But I do love a series. And a series about opening doors to places that seem intimidating? That’s appealing too.

But the idea of a “masterclass in reading”? That’s right up my proverbial street.

When I was a student, I faithfully collected series like this, determined to make sense of everything. Now I scan the list and hone in on the most appealing, seeking the nuttiest chocolates in the box.

What sets this series apart is that it does not attempt to summarize either the subjects’ works or their lives but focuses instead on their actual writing.

“Its starting point is that in order to get close to what a writer is all about, you have to get close to the words they actually use and be shown how to read those words.”

Not everybody who contributes to this series approaches their subject in the same way, but Stella Sandford arranged the extracts that she had chosen from Beauvoir’s works chronologically.

This allows her to highlight specific arguments while “showing the relationship between them, even where this means that some ideas are later denounced as failures and superseded”.

The idea of a philosopher willing to criticize her own work, a consistent willingness to explore and revise has a peculiar draw for me. If Beauvoir herself felt that she had failed in articulating some specific elements of her thinking, surely that allows me, as a fumbling reader, to struggle with her prose.

And this book was something of a struggle for me, though on its cover, Simone looks like she’s peeking out from behind her book, playful and inquiring.

(A turn-about shot would have shown me cowering behind mine, anxious and antsy. I knew the whole question of existentialism was going to pop out at any second, and I felt distinctly unprepared.) 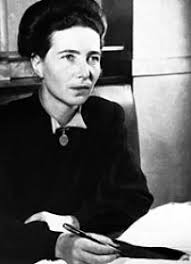 Only a few pages in: “So what is existentialism?” (And, conveniently, the first chapter is titled “Anxiety”.)

Not to worry: Stella Sandford’s explanations are clear. (If I had to read several sentences repeatedly, that’s on me: I rarely read philosophy. Anyway, it was not a chore to re-read them and it was the idea not the language that slowed me. It was a struggle, but a rewarding one.)

Beauvoir was one of the first women to enter the philosophy agrégation, an examination which allowed one to pursue a career as a philosopher. She was born in 1908 and excelled in this test but ultimately chose to write rather than pursue a career in the European academy.

Her range across forms and genres is undoubtedly one of the factors which has led some to suggest that she is not truly a philosopher, for although she did write philosophical essays, she also produced memoirs, travel pieces, magazine articles, letters, political essays, literary criticism and theory, autobiography, interviews, plays, short stories and novels. Had she been a man, this might have been seen as strengthening her reputation rather than weakening it.

Stella Sandford refers to works in a variety of forms, although the emphasis is on Beauvoir’s philosophical writings. (Those aren’t as intimidating as I had expected either. Whether through skillful selection or via her commentary, in this context, Beauvoir’s works appear accessible and comprehensible with time and focus.)

When asked in 1976 what she would have changed about her autobiography, Beauvoir replied quickly:

“I would give a very frank account of my sexuality. yes, a truly sincere account, and from a feminist point of view. Today, I would like to tell women how I lived my sexuality because it is a political, not individual issue. At the time I didn’t do it because I hadn’t understood the magnitude and importance of this issue, nor the necessity for individual honesty.”

This echoed the answers provided in the introduction in response to “So what is existentialism?” Decades later she is still revising and revisiting: truly inspiring.

Beauvoir’s answers  to “Who am I?” and “What does it mean to be a human being?” are presented over ten chapters in this slim volume, each one raising additional questions but rooted in curiosity not confusion. At the end of it, I still do not know How to Read Beauvoir. But Stella Sandford does.

There is no reason to be alarmed: a slim but hearty book can span a rewarding reading day, bracketed with coffee in the morning and a glass of wine in the evening, and lots of big thoughts in between.

(The next time that somebody uses the word ‘existential’ in a sentence, I will think about Beauvoir peeking out from this book cover.)

What’s the last book/author that you read (or did not read) because it/she/he made you nervous?

If you could recommend a How to Read title for this series, whose name would you add to the list?

Project Notes:
Day Seven of 45 and I will soon round up my Lives of Women and Girls theme. Maybe reading this introductory text rather than heading straight for The Second Sex is cheating. And maybe reading the graphic retelling of the Ramayana (told from the perspective of the queen for a change) is cheating too. But retellings and revisionings are irresistible for me. A new theme coming soon!